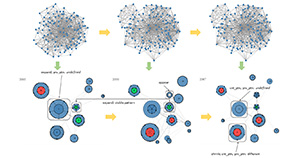 Drawing a large graph into the limited display space often raises visual clutter and overlapping problems. The complex structure hinders the exploration of significant patterns of connections. For time-varying graphs, it is difficult to reveal the evolution of structures. We group nodes and links into partitions, where objects within a partition are more closely related. Besides, partitions maintain stable across time steps. We focus on the structural changes of partitions. The complex structure of a partition is simplified by mapping to a pattern. The structural changes are exposed by comparing patterns of two consecutive time steps. We created various visual designs to present different scenarios of changes. In order to achieve a smooth animation of time-varying graphs, we extract the graph layout at each time step from a super-layout which is based on the super-graph and super-community. The effectiveness of our approach is verified with two datasets, one is a synthetic dataset, and the other is the DBLP dataset. 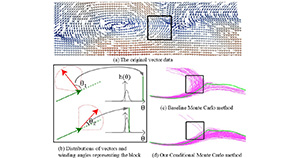 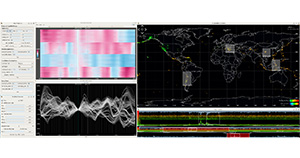 In seismic research, a hypothesis is that ionosphere disturbances are related to lithosphere activities such as earthquakes.

Domain scientists are urgent to discover disturbance patterns of electromagnetic attributes in ionosphere around earthquakes, and to propose related hypotheses.

However, the workflow of seismic researchers usually only supports pattern extraction from a few earthquakes. To explore the pattern-based hypotheses on a large spatiotemporal scale meets challenges, due to the limitation of their analysis tools.

To tackle the problem, we develop a visual analytics system which not only supports pattern extraction of the original workflow in a way of dynamic query, but also extends the work with hypotheses exploration on a global scale. Domain scientists can easily utilize our system to explore the heterogeneous dataset, and to extract patterns and explore related hypotheses visually and interactively.

We conduct several case studies to demonstrate the usage and effectiveness of our system in the research of relationships between ionosphere disturbances and earthquakes.